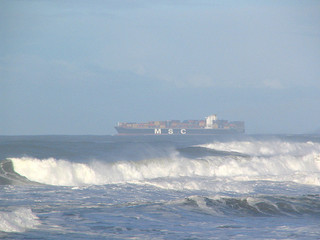 Geneva-based carrier Mediterranean Shipping Co. (MSC) will receive new box ships with a total capacity of 473,000 TEUs (20-foot-equivalent units) from 2009 to 2016 to make its orderbook the world’s biggest.

Of the orders, a total capacity of 97,000 TEUs have already been delivered, and 376,000 TEUs more are scheduled for delivery over the next three years. The ships will reportedly be either owned or chartered out.

MSC in May sold its 35 percent share in its terminal investment division, bolstering its finances by nearly US$2 billion.

The carrier’s total operated capacity is predicted to reach 2.75 million TEUs by the end of 2016, coming second only to Maersk Line’s fleet and orderbook that currently total 2.97 million TEUs.

Meanwhile, the box shipping line announced a general rate increase on all cargo from the Far East to the east coast of South America effective August 15. The rate hike will be $500 per TEU and $1,000 per 40-foot container.