MM, Laguna, Cebu transitioning to modified ECQ until May 31 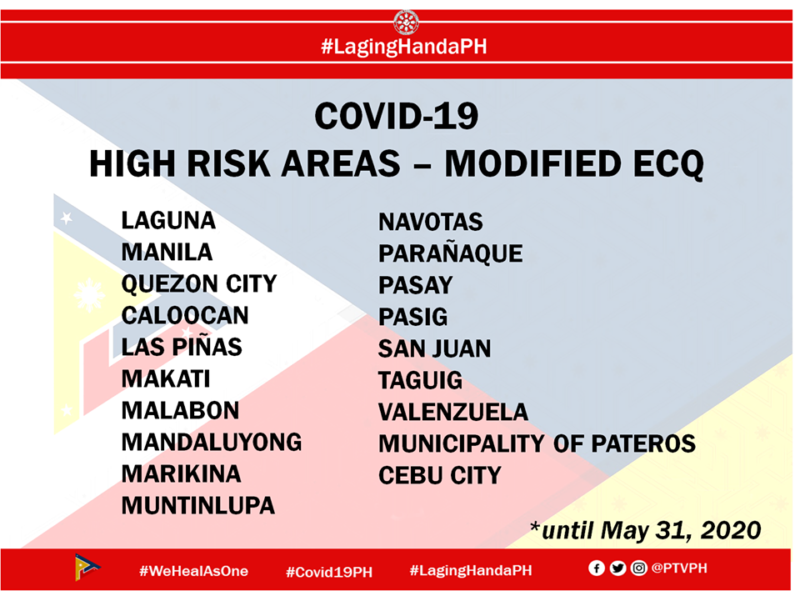 Metro Manila, Laguna and Cebu City will be placed under modified enhanced community quarantine (MECQ) from May 16 to May 31, 2020, Presidential spokesperson Harry Roque announced in an online press conference on May 12.

Industries that will be allowed to operate in MECQ areas are being finalized and will be announced on May 13, Roque said.

The new list of low-, medium and high-risk areas for the spread of the coronavirus disease after May 15 was part of Inter-Agency Task Force for the Management of Emerging Infectious Diseases (IATF) Resolution No. 35, which was approved by President Rodrigo Duterte.

Low-risk provinces and cities no longer under community quarantine starting May 16 are:

Regions and cities under moderate-risk and will be placed under general community quarantine (GCQ) until May 31 are:

Provinces, highly-urbanized cities, and independent component cities characterized under low-, moderate and high-risk areas may appeal their classification to the IATF Screening and Validation Committee with the concurrence of the Regional IATF (RIATF) no later than May 13.

IATF Resolution No. 35 also adopts recommendations of the National Task Force against COVID-19 in relation to the proposed zoning concept and corresponding qualification and its phased response or intervention for areas under MECQ.

Pursuant to this, city/municipal local government units are allowed to declare the classification of barangays based on risk thresholds to be confirmed by the RIATF per Executive Order No. 112.

To implement this, there will be different zones based on the number of cases within a zone: