The Metropolitan Manila Development Authority (MMDA) will shorten the unified curfew in Metro Manila by two hours, or from 12 midnight to 4 a.m., starting October 13.

The adjustment in curfew hours is in light of the steady decrease of active COVID-19 cases in Metro Manila and “rapid and efficient detect and isolate strategies and enhanced vaccination efforts”, according to MMDA Resolution No. 21-21. The resolution was signed on October 10 by members of the Metro Manila Council (MMC), the MMDA’s governing board and policymaking body composed of mayors of Metro Manila cities. 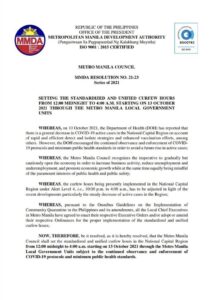 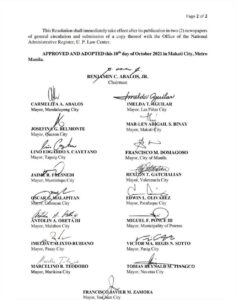 In adjusting the curfew hours, the memo cited the need to “gradually but cautiously reopen the economy in order to increase business activity, reduce unemployment and underemployment and promote economic growth while at the same time equally being mindful of the paramount interests of public health and public safety.”

The reduced curfew hours are still subject to continued observance and enforcement of COVID-19 protocols and minimum public health standards, the resolution noted.

Metro Manila is currently under Alert Level 4—until October 15—under the new alert level system being pilot-tested by government to curb further spread of COVID-19 and its variants. The second strictest level, Level 4 covers areas where case counts are high and/or increasing, and where total bed and intensive care unit utilization rates are high. Metro Manila’s alert level is expected to be downgraded to level 3 by Oct 15, Presidential spokesperson Harry Roque said on Oct 10.