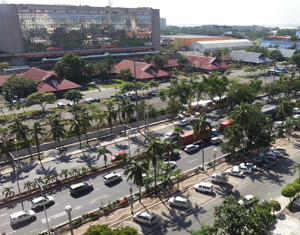 The public has been warned of even more traffic in the next two weeks as the 24/7 “last mile” route for cargo trucks takes effect on September 8, the latest government measure aimed at easing congestion at Manila ports.

The last mile route, contained under Cabinet Resolution 2 dated September 2, will allow cargo trucks servicing Manila ports to deliver shipments to warehouses outside of the express trade lanes and even during truck ban hours from September 8 to 22. But this is on condition that trucks also pull out containers on Sunday and until Monday before 12 noon (Sept 7-8 and Sept 14-15).

The last mile refers to the final leg of transportation from a transport hub (ports, for instance) to a specified destination. In the trucking industry, the last mile means movement of cargo trucks from ports to warehouses.

The resolution, approved by the Cabinet Cluster on Port Congestion, acknowledged the “urgent necessity to bring back normalcy in the Port of Manila by allowing movement of goods to and from the ports to decongest them, and to bring their efficiency level to avert further damage to the country’s economy.”

The policy was enforced as the peak shipping season kicks in ahead of the Christmas holiday, Cabinet Secretary Jose Rene Almendras said.

On Sept 7, Metropolitan Manila Development Authority (MMDA) personnel will issue cargo trucks with free stickers and will paint the word “Lasmayl’’ on the trucks’ rear bumpers so they won’t face apprehension by traffic marshals when they use last mile routes from Sept 8-13.

Another set of stickers will be issued on Sept 14 so trucks may use the same routes from Sept 15-22.

MMDA chairman Francis Tolentino said trucks with stickers will be allowed to use Metro Manila roads from the Port of Manila to their respective warehouses for 24 hours except on EDSA, España Boulevard in Manila (from Quezon Boulevard to Welcome Rotonda), Ortigas Avenue (from Santolan to Sta. Lucia), Katipunan (from Santolan to Commonwealth Avenue), Recto (from A. Santos to Legarda) and Taft Avenue.

These roads will still observe the existing MMDA truck ban that prohibits operation of trucks and vehicles with a gross capacity weight of more than 4,500 kilos from 6 a.m. to 10 a.m. and from 5 p.m. to 10 p.m. every day except Sundays and holidays.

Only trucks with tags provided by MMDA are allowed to use the last mile. Violators will be fined P5,000.

Land Transportation Franchising and Regulatory Board (LTFRB) chairman Winston Ginez during a panel discussion at the Supply Chain Management Association of the Philippines’ CEO CSCO (Chief Supply Chain Officer) Forum on September 4 said that the last mile scheme is “experimental” but if proven effective in decongesting ports could be extended until the situation at ports normalize.

MMDA’s Tolentino acknowledged there may be further traffic congestion until Sept 22 as a result of the last mile routes and asked the public for patience.

Last Friday, there was a huge traffic jam on the southbound lane of North Luzon Expressway and roads leading to the ports of Manila.

Agencies pointed the finger at each other for the gridlock.

MMDA explained its one-truck policy was only in force on C5 and could not have been the cause of the mess.

Instead, Tolentino pinned the blame on the heavy volume of cargo trucks servicing container vans at Manila ports which, he said, was caused by the slow processing of incoming trucks by the Philippine Ports Authority (PPA).

“The PPA should expedite their internal processes to allow the faster entry and exit of trucks getting their container vans inside PPA premises,” he said.

To complement the all-day last mile routes and other port decongestion measures in place, Secretary Almendras said the government will intensify its drive against “kotong” cops or law enforcers who extort money.

This was after truckers complained that some police officers and traffic enforcers were taking advantage of new policies implemented to decongest Manila ports, he said.

“We are setting up a special head office to ensure that we will be able to respond to the trucks that will be inappropriately detained or inappropriately arrested, to make sure we can explain to the traffic enforcers and to the other people that during these next two weeks, we want to move as much cargo as we can from the port,” Almendras said in a briefing last week.

He added that a new task force, led by National Capital Region Police Office General Allen Bantolo, will be formed to particularly be on the lookout for “kotong” cops.