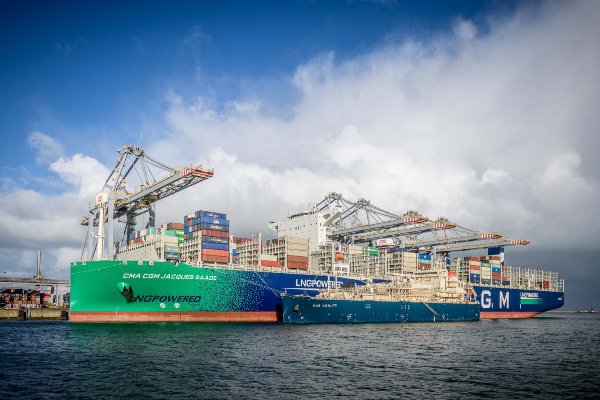 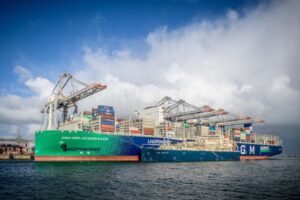 Once bunkering has been completed, the mega ship, which has an 18,600-cubic-meter tank, will continue on her maiden voyage, which began after she joined the fleet on September 22, the company said in a statement.

During the vessel’s bunkering, the use of biomethane—via the purchase of Guarantee of Origin certificates for 13% of the total fuel delivered—significantly reduced the carbon footprint of the LNG used in this operation, the statement added.

The Jacques Saade is the first of a series of nine 23,000-TEU, LNG-powered container ships ordered by the French shipping company in 2017, the order a historic first for vessels of this size. The CMA CGM Champs Elysees, which is part of this fleet, was also recently delivered.

The fleet will operate on the group’s French Asia Line (FAL 1) connecting Asia with Europe. The line provides a weekly service comprising 13 calls over 84 days. These nine vessels will be registered on the International French Register.

“The energy transition is well and truly underway at CMA CGM. As of today, our flagship is powered using Liquefied Natural Gas. By 2022, our LNG-powered fleet will be 26 strong,” said Rodolphe Saadé, group chairman and CEO.

“Through this initiative we are directly addressing the environmental challenges we are faced with. As well as being reliable, LNG is the best available technology for significantly improving air quality and contributing towards tackling global warming.”