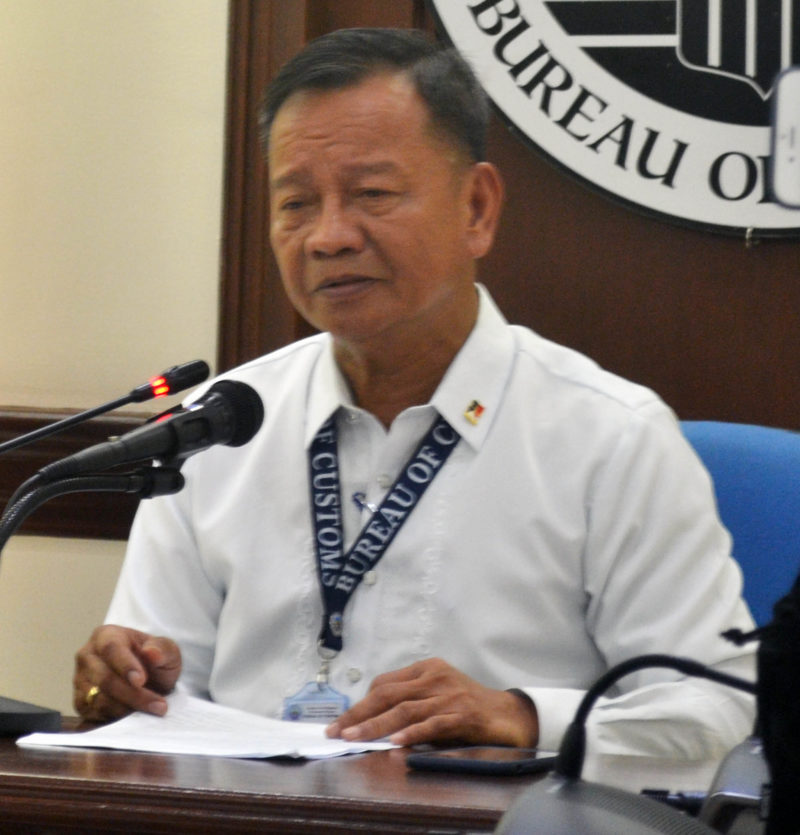 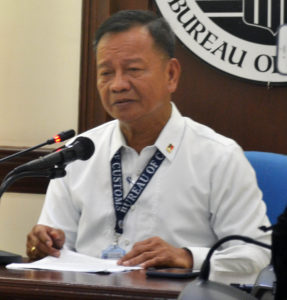 Customs Commissioner Isidro Lapeña continues to enjoy the full trust of President Rodrigo Duterte despite the brewing issue of P6.8 billion worth of illegal drugs that allegedly slipped past the Bureau of Customs (BOC), according to presidential spokesperson Salvador Panelo.

The statement came after Philippine Drug Enforcement Agency (PDEA) director general Aaron Aquino, in a recent radio interview, said Lapeña should be held liable if the magnetic scrap lifters found in Cavite released from BOC custody were proven to have contained illegal drugs.

“Kahit saan namang ahensiya, kapag nagkaroon ka ng kakulangan, tatamaan at tatamaan ang lider ng ahensiya na iyan. In this case, most likely, kung ganoon ang mangyayari, dapat tamaan si Commissioner [In any agency with a shortcoming, it is the agency leader who takes the heat. In this case, most likely, if that was what had happened, the Commissioner should take the heat,” Aquino said. He added, however, that it is still early for heads to roll as there is still an ongoing investigation by the National Bureau of Investigation (NBI).

Last August 10, four empty magnetic scrap lifters which might have originally contained a ton of methamphetamine hydrochloride (shabu) potentially worth P6.8 billion were discovered by PDEA.

The discovery followed the seizure on August 7 of about 500 kilograms of shabu, estimated to be worth P4.3 billion and one of BOC’s biggest seizures to date, inside magnetic scrap lifters at the Manila International Container Port (MICP).

BOC, on the other hand, believes no drugs were inside the magnetic scrap lifters as the lifters had tested negative in PDEA’s swab test. BOC also said its x-ray machines did not detect anything inside these scrap lifters.

Panelo noted that the Department of Justice has already ordered an investigation into the matter while the NBI is presently conducting its own investigation.

“So hopefully after the findings, we will undertake positive action regarding the matter,” the spokesperson said.

Former presidential spokesperson Harry Roque last August also said Duterte still had trust and confidence in Lapeña and PDEA even after the discovery that illegal drugs that might allegedly have been contained in the magnetic scrap lifters had slipped past BOC.

Duterte, in a separate statement, even said PDEA’s claim was pure speculation and that he was convinced there were no drugs inside the magnetic scrap lifters.

For his part, Lapeña said “other parties seem to be discrediting whatever actions we have done and continue to do regarding the incident and even ignore the facts of the case.”

He noted that, “For the record, I ordered for an investigation early on, from the time that two magnetic lifters containing 355 kilos of shabu were intercepted at MICP. In fact, two investigation teams were created relevant to these incidents.”

He insisted that the “four magnetic lifters consigned to SMYD Trading went through proper customs clearance. All xray images were submitted to the House Committee on Dangerous Drugs and the Senate Committee on Blue Ribbon. There is no single xray image kept from the eyes of the oversight committees.”

Earlier, Atty Ma. Lourdes Mangaoang, Deputy Collector for Operations and Assistant Project Manager of Customs Modernization and Tariff Act PMO, also insisted that the magnetic lifters recovered in a Cavite warehouse contained shabu as shown by x-ray images, but that Lapeña did not act on her findings.

“Pinipilit niya talaga na wala. ‘Yun ang statement na ini-issue niya. Pero pinapabayaan niya ‘yung mga tao niya na magsalita, sinasabing walang laman, pero siya mismo, nagsasabi na walang laman ‘yan despite after the fact na sinabi ko sa kaniya, ‘May laman ‘yan, sir, imbestigahan mo,’ (Lapeña really insisted that the magnetic lifters were empty. That was the statement he issued. He allowed his people to say that the lifters were empty; even he himself said there was none despite the fact I told him, ‘There is, please investigate’.)” Mangaoang said in an interview with Dobol B sa News TV last Oct 17.

She said she is convinced the magnetic lifters containing shabu were deliberately cleared for release. “Noong una, ang tingin ko napalusutan sila. Pero after akong makinig sa mga istorya nila, sa mga kuwento nila, I am convinced, pinalusot ito (In the beginning, I thought the lifters slipped past them. But after I listened to the stories, I am convinced they let it slip.)”

Lapeña said he will submit to results of congressional investigations.

He noted PDEA’s Aquino “should not pin down and blame entirely this problem (on) the Bureau of Customs. Let me emphasize again the importance of timely intelligence sharing from the PDEA. I would like to remind him that the lifters consigned to Vecaba Trading were intercepted at the port because of shared information.

“I would also like to remind DG Aquino that it was the PDEA that initiated all operations concerning Vecaba and SMYD shipments. It was also Ismael Fajardo, Jr., one of his most trusted men in PDEA, who orchestrated the entire operations and intelligence build up on this case.”

He also reminded Aquino of Executive Order 15 signed by President Duterte on March 6, 2017 which created the Inter-Agency Committee on Anti-Illegal Drugs (ICAD) and Anti-Illegal Drug Task Force To Suppress the Drug Problem in the Country. PDEA is the lead agency of ICAD.

As Chairperson of the ICAD, PDEA shall have the overall responsibility to ensurethat the objectives of ICAD are accomplished.

“Finger pointing and blaming other agencies does not add up in the government’s war against drugs, more so blaming one government agency alone, as if it has done nothing.

“DG Aquino, being the head of ICAD should not easily point or blame a member agency when there is obvious failure of intelligence or lack of coordination among member agencies under his leadership.

“Each agency involved in the country’s anti-drug campaign has their own mandate to fulfill.”