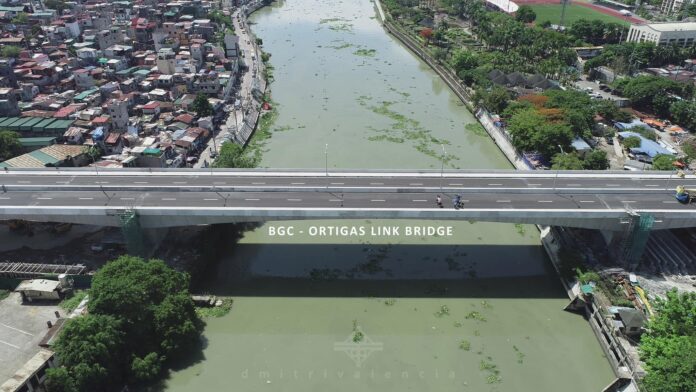 The Kalayaan Bridge in Makati connecting Pasig and Taguig partially opened today (June 12), in time for the 123rd anniversary of the proclamation of Philippine independence.

Also known as the Sta. Monica-Lawton Bridge, the four-lane 440-meter bridge is part of efforts to decongest traffic on EDSA and C-5 and will facilitate connectivity between Kalayaan Avenue in Makati City leading to Bonifacio Global City (BGC) Taguig City and Pasig and Mandaluyong cities, according to Public Works and Highways Secretary Mark Villar in an earlier statement.

Across Pasig River, Kalayaan bridge is a key component of the P1.79-billion BGC-Ortigas Center Link Road Project, one of the big-ticket projects under the Duterte administration’s Build, Build, Build infrastructure program.

The BGC-Ortigas Center Link Road Project is expected to slash vehicle volume on EDSA by about 20%, according to the Department of Public Works and Highways.

Villar said the cities of Pasig and Mandaluyong may be reached from Kalayaan Avenue, Makati City and Bonifacio Global City, Taguig City in about 12 minutes via Kalayaan bridge.

Aside from construction of the bridge, the project involves rehabilitation and widening of the 476.58-meter stretch from Brixton (corner Reliance Street) to Fairlane Street and the 232.34-meter BGC 8th Avenue; construction of the 125-meter upward and downward ramps at Kalayaan Avenue Intersection and the construction of Lawton Avenue-Global City Viaduct, according to Public Works Undersecretary for Unified Project Management Office Operations Emil Sadain.

The viaduct structure traversing Lawton Avenue up to the entrance of BGC is expected to be compled by last quarter of the year.