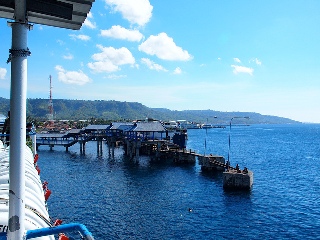 Indonesia has to develop two key seaports outside North Jakarta to improve the country’s connectivity in time for the full ASEAN market integration in 2015.

Kuala Tanjung Port in North Sumatra, which is now under construction, and Bitung Port in North Sulawesi, currently being expanded, should be converted into international maritime hubs to capitalize on the bigger market opportunities within the ASEAN Economic Community (AEC).

Good local maritime connectivity is the key to the country’s economic growth and strong performance in the AEC, according to Edib Muslim, spokesman of the Committee for the Expansion and Acceleration of Indonesian Economic Growth.

The committee is in charge of implementing the Master Plan for the Acceleration and Expansion of Indonesia’s Economic Development.

He urged the government to make it mandatory for foreign ships to call at the two ports, rather than at Tanjung Priok port in North Jakarta, reports The Jakarta Post.

Tanjung Priok is the country’s busiest maritime gateway and has been experiencing congestion and delays due to overcapacity.