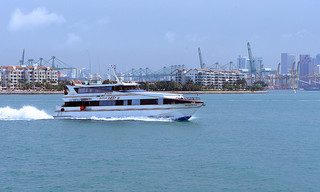 Indonesia Port Corporation (IPC) said it has forged an agreement with China Merchants to develop the Port of Tanjung Sauh in Batam at a cost of IDR20 trillion (US$2 billion).

Richard Joost Lino, president director of IPC, formerly Pelindo II, said they will sign a memorandum of understanding at the end of July for China’s state-owned company Chinese Merchants to invest in a container and iron ore transshipment terminal at the port of Batam.

Construction of the transshipment terminal will start in 2013 and end in 2015 or 2016. Lino said the terminal can handle four million 20-foot equivalent units and 100 million tonnes of iron ore a year.

“China Merchants is ready to invest for up to the majority stake of [the port],” he said.

The Port of Tanjung Sauh is one of three development projects lined up by government-owned port operator IPC to reduce logistics costs.

IPC will also build the $4 billion Kalibaru Terminal at the Port of Tanjung Priok and the Porong Port at a cost of $1 billion.

The first phase of the Kalibaru Terminal project is set to begin and will include a 7-kilometer toll road, said Lino. It will also involve the development of three container terminals and two fuel berths. Completion date is 2014.

Sorong Port, to be built starting this year, is expected to serve a new corridor linking eastern Indonesia, Australia, and the United States, said Lino.