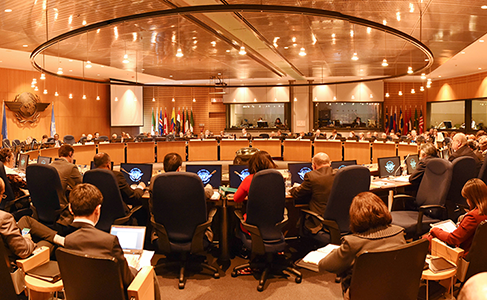 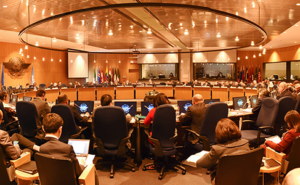 The adoption, made on June 27, 2018, comes less than two years after ICAO’s 192 member states achieved their historic agreement on CORSIA at the organization’s 39th Assembly, an emissions-offsetting first for any global industry sector.

“Gaining agreement on this new Volume IV to Annex 16 is critical to helping States and airlines to operationalize CORSIA per its established deadlines,” said ICAO Council president Dr. Olumuyiwa Benard Aliu in a release.

“This especially pertains to its monitoring, reporting and verification (MRV) scheme, which describes in detail what has to be done, by whom, starting with the collection of information on international aviation CO2 emissions by airlines as of January 2019.”

Aliu further noted that the CORSIA MRV provisions had been tested before their adoption, with the support of the government of Germany and the active participation of six additional states and 10 airlines.

Also approved at the council’s June 27 meeting is the 2018 version of the ICAO CORSIA CO2 Estimation and Reporting Tool, which provides a simplified tool for small operators to monitor and report their CO2 emissions, and further agreement was achieved around the specifics for a CORSIA Central Registry.

Future Council work on CORSIA will focus on the timely realization of the remaining CORSIA implementation elements, including the evaluation of carbon market programs against a set of robust criteria, the determination of its eligible emissions units, and which aviation fuels will meet the CORSIA sustainability criteria.

“Significant effort was made at the global-level to ensure that these CORSIA SARPs [standards and recommended practices] could be adopted within such a limited timeframe, and that States and airline operators would be prepared to use them,” commented ICAO Secretary General Dr. Fang Liu.

Aliu concluded by noting: “Aviation has now set out not only its climate change goals, but also the means to achieve them. The progress achieved today is a clear demonstration of the unwavering commitment, on behalf of both governments and airlines, to minimize the future impact of international aviation on the global climate.”

The adoption of CORSIA SARPs complements other elements in the basket of measures including the enhancement of air navigation efficiency, the adopted aircraft CO2 certification standard, and the long-term vision on the use of sustainable aviation fuels.​