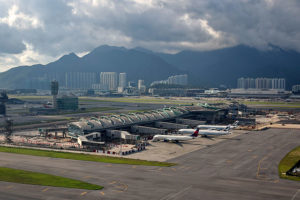 HKIA celebrates its 20th anniversary in 2018, marking two decades that have seen significant development since the airport’s relocation from Kai Tak. Over the past 20 years, the number of destinations served by HKIA increased to over 220 from 120, while the number of airlines operating at HKIA rose to more than 120 from 60. Passenger and cargo volumes more than doubled, making HKIA one of the busiest airports in the world.

During the reporting year, HKIA continued to undergo a series of enhancements to ensure that its capacity will cater to the growing demand and to further enhance passenger experience. The three-runway system (3RS) has been progressing well since construction began in August 2016.

To cater to the demand in the short and medium term until the 3RS enters service, enhancement works in the terminal have been kicked off.

Fred Lam, chief executive officer of Airport Authority Hong Kong, said, “Terminal 1 expansion started during the financial year, after its completion, 48 check-in counters and two new baggage reclaim carousels will be added. The interior of Terminal 1 is also under renovation to create a more attractive, comfortable environment. In addition, a 200-metre long, air-conditioned Sky Bridge between Terminal 1 and the North Satellite Concourse (NSC) is under construction, which will reduce travel time to gates in the NSC and become an attraction in its own right.”

To further consolidate its leading, high-value cargo hub status, HKIA expanded its capacity to capture the potential of rapidly growing business segments. And to capture the rapid growth of e-commerce, a new logistics center equipped with innovative features will be built at Kwo Lo Wan to serve the e-commerce, temperature-controlled airfreight, and transshipment segments.

On the other hand, construction of the first new hotel at SKYCITY has commenced. SKYCITY integrates commercial development with a new tourism and business hub that comprises hotels as well as retail, dining and entertainment facilities. The entire project is expected to be operational by 2023.

The enhanced connectivity provided by the soon-to-open Hong Kong-Zhuhai-Macao Bridge (HZMB) is expected to further strengthen HKIA’s role as a regional aviation hub. HKIA is building an intermodal transfer terminal (ITT), to be linked to the Hong Kong boundary crossing facilities by a 360-meter bonded vehicular bridge.

Adjacent to the SkyPier and scheduled for completion in 2022, the ITT and the bonded bridge will eliminate the need for air passengers arriving or departing via the HZMB to clear immigration in Hong Kong, providing more convenience for passengers.