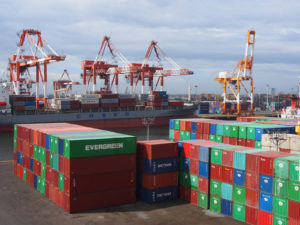 In a disclosure to the local bourse, ATI reported a net income of P1.77 billion for the first nine months of the year, on the back of robust container volume handled by its international gateway ports in Manila and Batangas.

This figure represents an increase of 23.9% from P1.43 billion in third quarter alone of 2016, the port operator said in a press statement.

ATI’s total revenues for the first nine months of the year totaled P7.72 billion, up 13.7% from P6.80 billion in the same period of last year.

For the same period in review, Manila South Harbor handled over 820,000 twenty foot equivalent units (TEUs) of foreign boxes, setting it on track for a back-to-back one million-TEU annual throughput performance after achieving a record year in 2016.

BCT has handled just short of 150,000 TEUs by end-September, bringing it close to its 2016 full-year container throughput of nearly 160,000 TEUs with still a quarter to go.

“ATI is ready and has the capacity for future volume growth. Investment in infrastructure, equipment and technology is continuous to sustain efficiencies at both Manila and Batangas ports in support of the country’s supply chain,” ATI executive vice president Andrew Hoad said.