Hapag-Lloyd’s loss grew in 2014, vows return to profit this year 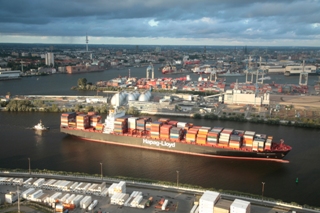 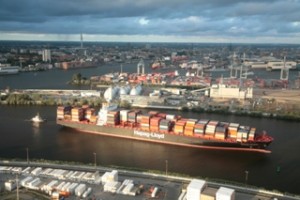 The company said its net loss last year amounted to EUR603.7 million (US$657.4 million) from a loss of EUR97.4 million the preceding year.

In a statement, Hapag-Lloyd said the result “was heavily influenced by one-off effects, primarily the costs of acquiring and integrating CSAV’s container liner shipping activities and an impairment recognized for a portfolio of old ships.”

The plummeting price of oil eased the cost situation slightly, but only towards the end of the year as falling fuel prices at liner shipping companies take several months to be reflected in the figures, it added.

“In terms of results, 2014 was undoubtedly an extremely disappointing year. At the same time, however, the successful merger with CSAV also made it a highly significant, ground-breaking year for Hapag-Lloyd. We are now much more competitive and fit for the future, to which we are looking with optimism,” said Hapag-Lloyd CEO Rolf Habben Jansen.

CSAV’s services are being incorporated into Hapag-Lloyd’s global network, with the integration expected to be complete by June and to create the fourth largest liner shipping company in the world.

“As well as the integration, we have launched a wide range of other measures from which we expect a substantial improvement in earnings,” Habben Jansen continued. These include optimizing sales processes and costs, as well as modernizing the fleet, for which Hapag-Lloyd is currently in negotiations with several shipyards. It added it will be ordering new ships over the coming weeks.

Together with Hamburg Sud, CMA CGM, and other shipping companies, Hapag-Lloyd will be offering new products between Asia and the western and eastern coasts of Latin America from July onwards. These services will employ over 50 ships in all, with Hapag-Lloyd contributing 20 of them. This includes CSAV’s seven 9,300-TEU newbuildings. Five from this series are already in service, with the final two set to be delivered in early May and early June.

“The merger with CSAV marks the opening of a new chapter in Hapag-Lloyd’s 168-year history. We are now looking ahead and focusing our efforts on returning Hapag-Lloyd to profitability and achieving a clearly positive operating result in 2015,” Habben Jansen concluded.

Hapag-Lloyd announced in December last year that the integration of CSAV was pushing through after gaining approval of all the relevant global maritime authorities for the takeover.

Meantime, Hapag-Lloyd said its supervisory board has accepted the resignation of group CFO Peter Ganz, who will vacate his position effective April 1, 2015.

The background for this change in the executive board is an agreement between shareholders stipulating that CSAV, as the new largest shareholder in Hapag-Lloyd, has the right to nominate an individual of its choice to assume the position of CFO.

Nicolas Burr, a 39-year-old native of Chile, was the CFO of CSAV from 2012 to 2015, based in Santiago de Chile. He had previously held management positions at a number of companies in Santiago, Buenos Aires and Wilmington in the U.S. After studying engineering, he earned an MBA at MIT in Cambridge.