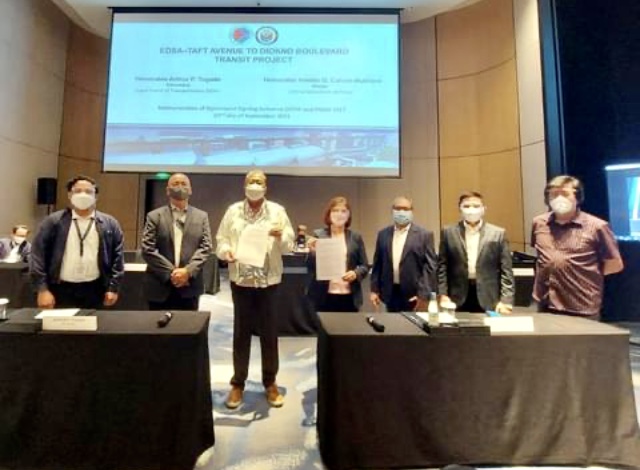 SM Prime Holdings’ proposed 1.89-kilometer monorail and EDSA-Tramo flyover extension project got a boost with the signing of a memorandum of agreement between the Department of Transportation (DOTr) and the Pasay city government on Sept 22.

The monorail project will provide easy access to the Bay Area, Pasay City’s central business district, connecting the corner of EDSA and Taft Avenue to Diokno Boulevard in Pasay City.

The project is designed to decongest traffic and offer seamless travel, Tugade said during the MOA signing.

Once operational, it will be integrated and interoperable with other transportation systems, including Light Rail Transit 1, Metro Rail Transit 3, EDSA Busway, and EDSA Greenways.

The project’s components and timetable were jointly presented by SM Prime Holdings and the Pasay local government to DOTr on September 7.

The unsolicited project, which will require approval by the National Economic and Development Authority Board, will be built at no cost to the national government. No direct guarantees, subsidies or equity will be provided either, according to DOTr.

The project will be issued an operating franchise by DOTr but will not enjoy exclusivity for “any corridor vis-a-vis other transportation projects.”

In addition, the DOTr will have a 2 percent share in gross non-farebox revenues or earnings made outside passenger rides