The Philippine government is now looking to begin the planning of the second runway for Clark International Airport (CRK) as construction of the new passenger terminal building (PTB) is already 53% complete and expected to be completed in 2020.

Clark International Airport Authority (CIAC) president Jaime Alberto Melo announced in a site visit and press conference on March 27 that “the national government will begin planning and construct a second runway in accordance with the Aéroports de Paris Ingénierie (ADPI) master plan.” ADPI was tapped by the government to create a feasibility study and master plan for CRK.

The government aims to complete the new two-kilometer runway, which will double the capacity of CRK, before the end of the current administration, he added.

The new PTB, meanwhile, spans around 100,000 square meters, including its landside and airside facilities and is eyed for completion and full operation by mid-2020. The 82,600-square-meter terminal is designed to afford views of the Sacobia mountain ranges to the west and Mt. Arayat to the east. The new terminal will increase CRK’s annual capacity to 12 million passengers. 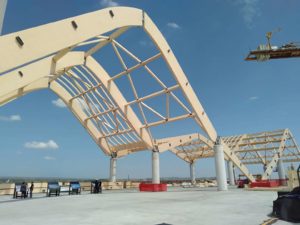 Bases Conversion and Development Authority (BCDA) president Vivencio Dizon during the same event said the new PTB is part of a five-phase expansion plan to make CRK a major gateway of the region. The airport is also seen to help decongest the country’s main gateway, Ninoy Aquino International Airport, and create more jobs in Central Luzon.

He said that once the five-phase project is completed, it will bring CRK’s annual capacity to 80 million passengers.

In 2017, the joint venture between the Philippines’ Megawide Construction Corp. and India’s GMR Infrastructure won the contract to engineer, procure, and construct the CRK expansion project.

P2.04 billion in tariffs was collected from rice imports in January 2021, a year-on-year increase of 58% as the average valuation value of...
Read more