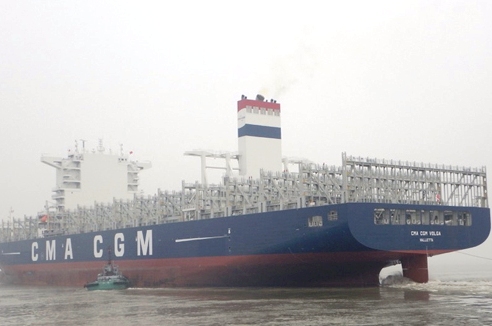 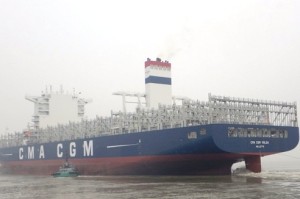 France’s top container shipping company CMA CGM announced it has deployed to the open seas the eighth of a series of 28 ships in the 9,400-TEU to 10,900-TEU range.

The 10,622-TEU CMA CGM Volga belongs to the series of vessels named after famous rivers that will be delivered until the third quarter of 2016. The Danube, Elbe, Litani, Tigris, Loire, Ural, and Rhone are the firsts of this series that started being delivered on June 30, 2014.

Sailing under the Malta flag, Volga was built in the Chinese shipyard New Times Shipbuilding in Jiangsu, China, and started her first rotation in Dalian, China, on March 20.

Measuring 300 meters long and 48 meters wide and with 1,458 40-foot reefer plugs, the vessel offers a maximal loading capacity while meeting the technical constraints of the Strait of the Bosphorus.

The newbuild is also equipped with all the latest environmental technologies which significantly reduce its C02 emissions as well as the group’s carbon footprint.

Getting their hands on mega ships

As this developed, the French container line, the third biggest in the world by capacity, is aiming to crown itself the owner of the largest container ship, as it has entered into discussions to build at least three ultra large container vessels (ULCVs).

The three box ships will reportedly be built by South Korea’s Hanjin Heavy Industries Construction Co. The 20,000-TEU ships will have a total price tag of US$420 million.

The first ship is set for delivery in 2017, for deployment on the Asia-Europe route, the world’s busiest trade lane.

CMA CGM will join carriers Maersk Line, Mediterranean Shipping Co., and China Shipping Container Lines in the big leagues, as these companies all have ships boasting capacities of at least 18,000 standard containers.

Shipping lines are in a race to build mega ships to leverage on the advantages of economies of scale which will allow them to reduce the per-container transport costs of goods and boost profits in an industry troubled over the years by overcapacity, weak demand, and falling freight rates.