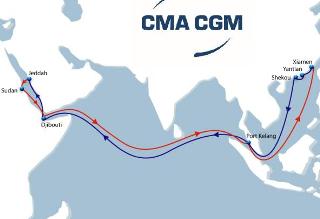 Marseilles-based box carrier CMA CGM is broadening its market presence in the Red Sea with the launch of a second Far East-Red Sea loop, an addition to its ongoing service in the area.

“This new service is in addition to our existing Asia Northern Red Sea Express (REX2) which together will improve our port coverage to meet the growing demand and customer requirements in the Red Sea market,” the French shipping company said.

“It was strategic to consolidate and build up our presence in the Red Sea markets with improved services from Asia,” said Stéphane Courquin, vice-president of CMA CGM Asia Med Lines.

Meanwhile, the company announced a series of rate hikes to be implemented next month that will affect its Asian network.

A general rate increase (GRI) will be imposed on all shipments from all Asian ports (including Japan, Southeast Asia, and Bangladesh) to Jeddah, Ain Sukhna, Aqaba, Djibouti, Port Sudan, Aden, and Hodeidah from April 1. The new rates will be higher by US$200 per 20-foot-equivalent unit for Jeddah only, and $300 per TEU for all other Red Sea ports.

A two-step GRI will be levied on all cargo from all Asian ports, except Japan, to the Middle East Gulf ports.

A two-step rate restoration is also scheduled for the Asia-Sri Lanka/Pakistan/West India swing. Japan is not included in the rate hike for all cargo, which is $100 per TEU effective April 1 and $150 per TEU from April 15.

Finally, freight rates for all shipments from the Far East to the West Mediterranean, Adriatic, East Mediterranean, Black Sea, and North Africa will be raised by $650 per TEU effective the first day of April. Rates to Syria will be hiked by EUR500 per standard unit from the same day.