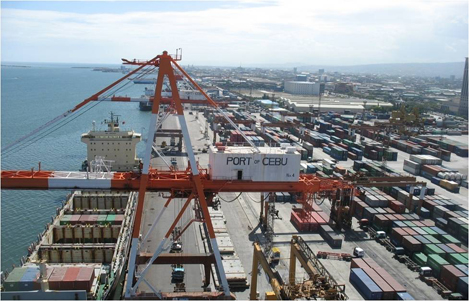 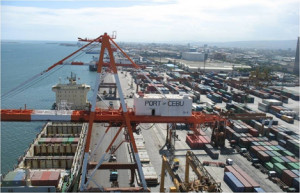 Port congestion is not unique to Manila, with Cebu International Port (CIP) going through a similar situation since last year.

At the end of 2014, yard utilization was 92%, a clear indication of congestion, said Page during a presentation at the 8th Philippine Ports and Shipping Conference on February 13.

OPASCOR is a workers’-owned and -operated company that provides cargo-handling services at CIP; Cebu Port Authority (CPA) owns and regulates the port.

The congestion is “the worst we’ve [seen]” since OPASCOR began working with CIP in 1990, Page said.

She attributed the high yard and berth utilization to increase in volume and high container dwell time; limited yard space and limited backup yard for foreign operations; allocation of CIP yard for domestic use; truck bans and bunching of trucks; and road and port repairs.

Page said Cebu, being one of the country’s major trading centers, has seen growing volumes since 2004. CIP processed more than 200,000 twenty-foot equivalent units (TEUs) of cargoes for the whole of 2014. She noted that the 2014 volume would have been higher if not for the various limitations encountered.

Container dwell time, meanwhile, has also grown. In 2013, dwell time was only eight days, but this almost doubled in 2014 to 14 days, then further increased to 16 days in January 2015. Page noted that 67% of containers have been at the port for more than seven days.

Compounding the situation are the longer time to process cargo clearance, and the sudden surge in alerted shipments.

Data from the Bureau of Customs (BOC)-Cebu showed that from January 5 to January 26 this year, clearance of cargoes took from 0.7 to 21 days. Of the 2,426 entries filed during that period, 24% or 591 entries were delayed for more than six days, Page noted.

Alert orders issued by BOC-Cebu and the Manila head office also recorded a high of 60 in January this year, up from 11 in November and six in December last year. By early February this year, the alert orders have decreased to 10.

Page noted that some shipments issued with alert orders still need to be cleared by BOC’s head office in Manila, since this is where the orders came from.

Cebu port also has to deal with other concerns in processing shipments including cargoes with document /valuation/payment issues, and cargoes not withdrawn despite BOC clearance.

Page said some Cebu cargo owners, like some in Manila, have “made the yard their own private depots”.

Congestion is also compounded by limited berth space. Of CIP’s 690-meter-long berth, only 74% or 512 meters are used for foreign vessels; the shallow draft of 4.5 meters prevents big vessels from calling. The remaining 26% or 178 meters of berth is designated for domestic operations.

Due to the limited berth space, “when vessels simultaneously arrive at Cebu port, we have a problem,” Page pointed out.

Another concern, though less serious than in Manila, is the truck ban in all cities and municipalities surrounding CIP. The truck bans are implemented from 6 a.m. to 8 a.m. and 5 p.m. to 7 p.m. According to Page, the Cebu chapter of the Philippine Exporters Confederation, Inc. is looking for a solution to the issue.

Bunching of trucks is yet another problem. “For some reason, trucks like to come only in the afternoon,” Page mused.

Several road repairs going on near the port, and the continuing rehabilitation of CIP’s apron damaged in the earthquake in 2013 have likewise contributed to the congestion.

Due to space limitations, OPASCOR and CPA “had to limit, sometimes, the receiving period of export containers in the yard.”

To address these issues, Page said OPASCOR, together with CPA and BOC-Cebu, has embarked on short-term solutions.

These include CIP yard extension; additional area for Customs-seized as well as abandoned cargoes; maximized yard capacity; improved operational efficiency; increased container withdrawal; additional container yard (owned or leased) outside but near CIP; and constant dialogue between the government and stakeholders.

Page said free storage at CIP was also shortened to five days from six days to discourage long container stay inside the facility.

OPASCOR, on its own, has leased two container yards—one measuring 1.2 hectares and one 2.3 hectares—outside CIP that are currently being used as empty container depots which, by the second quarter of the year, will likewise be used as a truck holding area. Combined, both spaces can accommodate at least 4,024 TEUs.

OPASCOR also purchased additional equipment such as forklifts and rubber-tired gantries with higher-stacking capability. With the new equipment, CIP was able to stack 8,948 TEUs on February 5, compared with 7,707 TEUs previously. As of February 9, yard utilization has gone down to 80%.

Meanwhile, around 17 trucks had been bought and 30 trailers are currently operational.

More off-dock container yards near the port are being proposed since existing ones are far and trucks going to and from the port and the yards usually go through heavy traffic.

Page said CIP is currently holding up with some of the short-term solutions in place, but noted that “OK is not enough; we should be (doing) really good.”

Page called for the decentralization of authority from Manila. Some projects stalled due to the need for clearance or approval from the Manila head office include the CIP’s expansion (requires clearance from the BOC head office to declare it within the Customs zone and to comply with the procurement law); and the CIP dredging project (needs approval from the Department of Transportation and Communications in Manila).

The long-overdue new Cebu International Terminal, which has been on the drawing board since the 1980s, is still undergoing feasibility study by a Korean firm. Other feasibility studies on the project have previously been conducted but apparently came to naught.

Transport Undersecretary Julianito Bucayan, who was the keynote speaker at the Philippine Ports and Shipping Conference, said the current study will take three months to complete and will determine the location and costs of the new port.

Last year, CPA told PortCalls that the Cebu Port Commission, which Bucayan chairs, is just awaiting official development assistance to be able to transfer the international container terminal to Tayug, Consolacion in Cebu. Bucayan said Tayug is one of the sites being considered for the new port. – Roumina Pablo