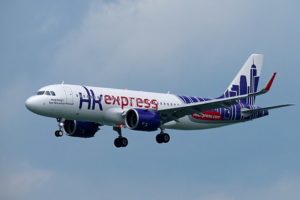 Hong Kong flag carrier Cathay Pacific has entered into a share purchase agreement to acquire 100% of HK Express (HKE), the acquisition putting it in control of three of the four airlines in the territory, after its carriers Cathay Pacific and Cathay Dragon.

In an announcement, Cathay said the transaction, conducted March 27, 2019, involves the purchase of 315,060,716 ordinary shares in HKE held by Hong Kong Express Holding Company Limited, which is owned by HNA Group, for the total amount of HKD4.93 billion ($628.11 million).

The shares represent 100% of the issued share capital of HKE, with the payment to be comprised of HKD2.25 billion cash and a non-cash component of HKD2.68 billion.

The transaction is expected to be completed by December 31, 2019 when HKE will become a wholly owned subsidiary of Cathay Pacific.

“We intend to continue to operate HK Express as a stand-alone airline using the low-cost carrier business model.”

It added that HKE captures a unique market segment and together with the extensive network of the Cathay Group could multiply connection opportunities through Hong Kong.

“This represents an attractive and practical way for the Cathay Group to support the long-term development and growth of our aviation business and to enhance the competitiveness of the Hong Kong hub during a time of intense regional competition,” The statement added.

On March 5, Cathay Pacific, Asia’s biggest international carrier, confirmed its interest in HKE and said it was in active discussions to acquire the airline.

The acquisition will give Cathay Pacific access to the growing budget-travel market, considering how a lack of capacity at Hong Kong International Airport (HKIA) has limited its capability to set up its own budget brand.

The confirmation comes as Cathay Pacific is losing market share in Hong Kong as it struggles against competition, particularly from low-cost Chinese carriers covering Hong Kong, China, and Southeast Asia.

HK Express is a Hong Kong-based low-cost airline with HKIA as its main hub. HKE provides scheduled air service to 28 destinations in Asia.

HKE is owned by HNA Group, a struggling Chinese conglomerate that has been looking to lower its debt pile. The group also owns Hong Kong Airlines, another Cathay competitor that has found itself in financial difficulties in recent months.

Completion of the deal depends upon certain conditions being fulfilled, including clearances required from relevant competition authorities, consents under relevant contracts of HKE, and the termination or variation of certain arrangements between HKE and its related parties.