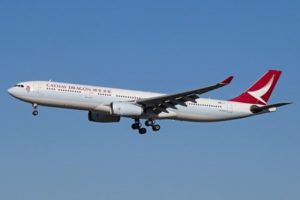 The mass protests in Hong Kong have taken their toll on the performance of Cathay Pacific and Cathay Dragon, as the airlines’ combined traffic figures for both passenger and cargo business in August 2019 fell sharply year-on-year.

The sister carriers carried a total of 2.9 million passengers last month, a drop of 11.3% compared to August 2018, Cathay Pacific Airways said in a release. Passenger load factor decreased by 7.2 percentage points to 79.9%, while capacity rose by 5.1%.

In the first eight months of 2019, the number of passengers carried grew by 2.2% and capacity increased by 6.5% compared to the same period for 2018.

The two airlines carried 161,394 tonnes of cargo and mail last month, a drop of 14% year-on-year. Cargo and mail load factor fell by 7.5 percentage points to 60.9%. Capacity was down by 0.6% while cargo and mail revenue freight tonne kilometers (RFTKs) dropped by 11.6%.

“Overall tourist arrivals into the city were nearly half of what they usually are in what is normally a strong summer holiday month, and this has significantly affected the performance of our airlines,” he added. “Our inbound Hong Kong traffic was down 38% while outbound was down 12% year-on-year, and we don’t anticipate September being any less difficult.”

The company said that with forward bookings for the remainder of the year down significantly, it will make some short-term tactical measures such as capacity realignments. “Specifically, we are reducing our capacity growth such that it will be slightly down year-on-year for the 2019 winter season.”

But the airline group said it remained optimistic in the medium term, adding that it would continue its investments in new aircraft and its enhancement of the customer experience to give travellers more reasons to fly with the airline.

On the cargo side, the airline’s business continued to face headwinds. Tonnage further deteriorated month-on-month across all regions, driven in particular by slow demand over the holiday season in different parts of the world, the effects of tropical storms, and disruptions at Hong Kong International Airport. Ongoing geopolitical tensions continued to affect overall market sentiment.

“Nevertheless, our outlook for September is slightly more positive and we expect to see demand progressively improve, driven by project shipments and the restocking of inventory as we enter the traditionally high-demand season,” Lam said.