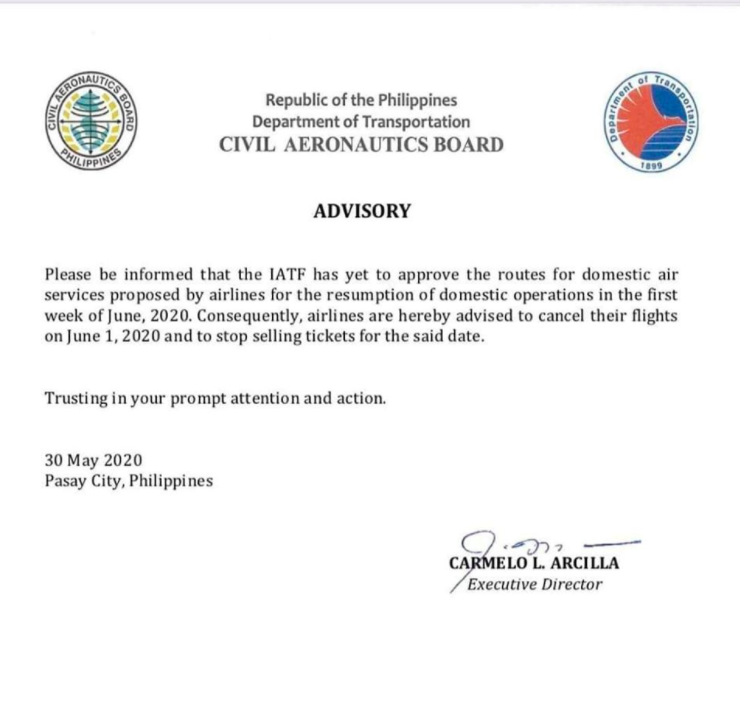 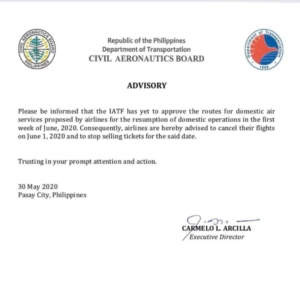 Not yet. That’s what the Civil Aeronautics Board (CAB) told airlines that have announced resumption of flights as early as June 1.

In a May 31 advisory, CAB executive director Carmelo Arcilla ordered airlines to cancel their planned flights and stop selling tickets as the Inter-agency Task Force for the Management of Emerging Infectious Diseases (IATF) has yet to approve routes for domestic flights in the first week of June. IATF is the government’s inter-sectoral body mandated to prevent the spread of the coronavirus disease.

The advisory came after local airlines, specifically Philippine Airlines and Cebu Pacific, announced the resumption of their operations in June following the easing of community quarantines nationwide.

Philippine Airlines on May 29 announced the resumption of international flights from June 1 to 30 while its domestic flights will start from June 8 to 30.

Metro Manila, Pangasinan, Regions II, III, IV-A, VII, Zamboanga City and Davao City will transition to GCQ from June 1 to 15 while other areas in the country will be placed under modified GCQ (MGCQ).

According to the revised omnibus guidelines in the implementation of community quarantine in the Philippines, road, rail, maritime, and aviation sectors for public transportation should operate at a reduced operational and vehicle capacity in accordance with guidelines by DOTr and in compliance with social distancing requirements in areas under GCQ.

In areas under MGCQ, public transportation should operate at a capacity in accordance with guidelines by DOTr and again in compliance with social distancing requirements.