Binondo-Intramuros Bridge to open in early 2022 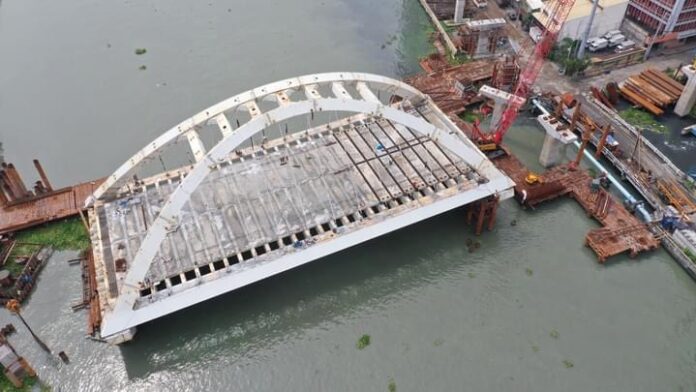 Construction of the P3.39-billion Binondo-Intramuros Bridge Project has an overall progress of about 81% and is eyed for opening by the first quarter of year 2022, according to the Department of Public Works and Highways (DPWH).

The four-lane, two-way Binondo-Intramuros Bridge Project will connect the historic district of Intramuros on Solana Street and Riverside Drive with the bustling district of Binondo on Rentas Street/Plaza del Conde Street and Muelle dela Industria. The bridge will also have a viaduct structure over Estero de Binondo.

It features a basket-handle-tied steel arch bridge with a total length of 680 lineal meters.

The design of the arch bridge conforms to new seismic design specifications and climate change considerations.

DPWH said ongoing activities are centered on the massive foundation of the up-ramp on Magallanes-Riverside Drive, the down-ramp on Solana Street at the Intramuros side, and the up-ramp on San Fernando Street.

DPWH has also met with the Manila Electric Co. to discuss the department’s request for the immediate reorientation of 37 kilovolt and 115 kV high-tension cables alongside Estero de Binondo near San Fernando Bridge, as these cables will be affected by the construction of the north down-ramp on the Binondo side and the electrical posts for the down-ramp on the Intramuros side.

Public Works undersecretary for Unified Project Management Office Operations Emil Sadain said the progress of work should be hastened by the expected arrival from Shanghai, China of the steel box girder component for the ramps by the third week of October.

Once the fabricated girders arrive, Sadain said the completed piers will be immediately launched and the already available precast slab will be installed to complete the ramps.

The project, funded from a Chinese grant, is being implemented by the agency’s UPMO-Roads Management Cluster 1 with project contractor China Road and Bridge Corp.

Upon completion, the bridge will carry extra traffic of around 30,000 vehicles per day and ease traffic congestion between the Binondo and Intramuros. It will also extend the life of the existing Jones, Delpan and MacAthur bridges by decongesting traffic, which will help reduce bridge maintenance cost requirements.

The project is part of the Metro Manila Logistics Improvement Program to address the long-time traffic gridlocks on major roads by constructing new bridges crossing Pasig and Marikina Rivers and the Manggahan Floodway.