Berth 6 in Manila terminal inaugurated; Berth 7 in the works 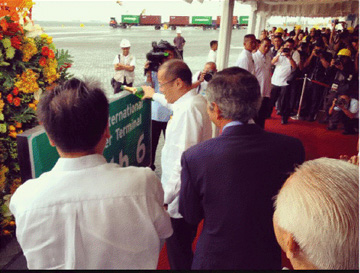 “The new berth is completed at the most opportune time for ICTSI,” ICTSI vice president and MICT general manager Christian Gonzalez said at the inauguration. “This enables us to prepare for the future since we will be able to provide the capacity needed as volume grows along with the country’s economic growth.”

ICTSI is, however, not done with its expansion plans and is sinking in another P135 million for groundwork and reclamation of 30 to 40 meters for Berth 7, which is actually an extension of Berth 6.

Contractors Hanjin Heavy Industries and EEI Corp said the project will be completed in December or early 2013.

The extension accounts for just 65% of the entire Berth 7 project, said Gonzalez. The rest will be completed by 2016 or as the need arises.

“We have already constructed the piles for Berth 7 beginning this year,” he said, noting that “actual operation will depend on the volume, demand and the economy which, in my opinion is growing very well. Most likely we will have it online sooner rather than later.”

Berth 6 is capable of servicing two regular vessels at any time or one higher-capacity vessel. It has a 300-meter straight wharf with a depth of 12 meters. It can be extended by another 300 meters, and dredged to 14.5 meters when needed.

Berth 6 is part of contractual obligations of ICTSI to the Philippine Ports Authority after the latter extended the operator’s contract for MICT for another 25 years. ICTSI’s first contract expires next year.