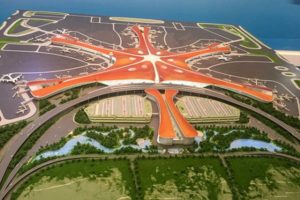 A number of advanced Chinese radar systems have been set up to provide faster and more accurate weather forecasts at Beijing Daxing International Airport, a multi-billion-dollar gateway in the capital expected to start operations this September.

One of these radar systems is a millimeter-wave cloud radar developed by a research institute affiliated with China Aerospace Science and Industry Corp., the country’s leading radar maker, reported Xinhua News.

According to the institute, the radar can monitor clouds, fog, snow and drizzle within 60 kilometers around the airport and obtain weather data. Working together with other radar systems, the new radar will improve airport weather forecasts with higher accuracy and provide better real-time monitoring and early warning of low-visibility conditions.

The radar only takes one minute to complete a scan while previous radars took around six minutes. The new system can function for 3,000 hours, five times that of ordinary radar systems.

According to its developers, the radar can detect dangerous weather conditions, such as thunderstorms and heavy winds faster and more accurately.

Construction of the new airport began on December 26, 2014 and the hub is nearing completion. There will be four runways, and about 80 aircraft stands, most of which can be configured to handle either one twin-aisle or two single-aisle aircraft.

The new airport is expecting a total of seven runways and another terminal to the south of the current one in the future, in order to accommodate 620,000 flights and 100 million passengers each year.

Reportedly, construction of the airport has cost nearly US$12 billion so far.