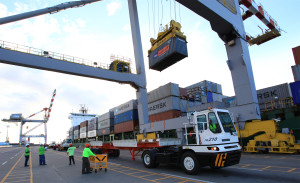 Philippine-listed company Asian Terminals Inc. (ATI) said there has been an increase in containerized cargo operations in Batangas port, two hours south of the Philippine capital Manila, yet it would take some time before it attains a high utilization rate.

ATI executive vice president Andrew Hoad said the traffic of completely built-up units of cars handled by Batangas port grew 54%. At 65,867 units, this comprised nearly half of the total CBUs sold nationwide by the Philippine car industry in 2012.

“Relatively, we have an underutilized container port that’s why we’re putting extensive efforts for marketing and there has been a good response. We are meeting freight forwarders, shipping lines, and locators in the Calabarzon (Cavite, Laguna, Batangas, Rizal and Quezon),” Hoad said, adding that ATI is getting good response.

ATI has a good chance of gaining new shipping lines as port users in two to three months’ time, Hoad noted but refused to give further details.

“It takes time in order for the locators, the freight forwarders, shippers to migrate. What we do is we promote the port well. We have a good product, but the steady growth and good growth will come when the network expands,” he explained.

Stakeholders are satisfied with the quality of product ATI offers at Batangas port, he said, but they want more volume growth.

“We give competitive service at a reasonable cost. Batangas is a complementary port to Manila and not a substitute,” Hoad said.