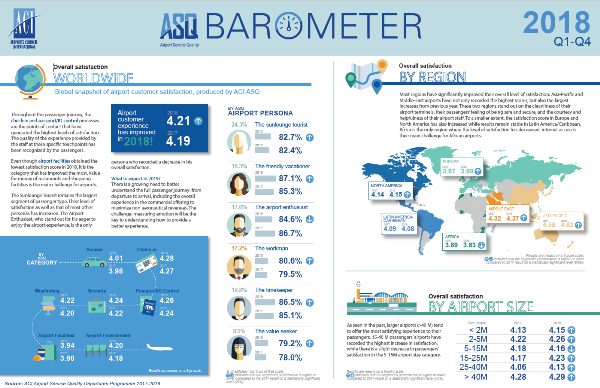 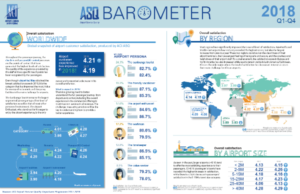 Overall global passenger satisfaction with airport service quality increased during 2018, with Asia-Pacific airports enjoying the highest score and the largest increase from the previous year, according to the latest findings of the Airports Council International (ACI) World Airport Service Quality (ASQ) barometer.

Airline check-in and passport/ID control processes generated the highest levels of satisfaction in 2018, while airport facilities are the points of contact that have improved the most. Value for money of restaurants and shopping facilities is the main challenge for airports.

In 2018, overall passenger satisfaction on a global level increased to 4.21 from 4.19 year-on-year (out of a five-point scale). This reflects the importance placed on customer experience and satisfaction by airports around the world.

To a smaller extent, the satisfaction score in Europe and North America has also increased while results remain stable in Latin America/Caribbean. Africa is the only region where satisfaction has decreased, mainly due to internet access challenges.

As seen in the past, larger airports tend to offer the most satisfying experience to their passengers.

“We have seen continuous improvement in all categories related to the departure experience, demonstrating that airports are committed to delivering a high-quality passenger experience,” said Gittens.

“Over 380 airports across 91 countries participate in the ASQ Departures survey which provides the research tools and management information to help airports better understand passengers’ views and what they value in an airport’s products and services.”

The quarterly barometer reports, based on objective measurements derived from the ASQ Departures survey, enable airports around the world to gain valuable insights to excel in the crucial arena of customer experience, increasingly a competitive driver.

All category scores, such as access, check-in, wayfinding, security, passport/ID control, airport facilities and airport environment have shown improvement, with the greatest improvement in satisfaction belonging to the “airport facilities” category, climbing from 3.90 in 2017 to 3.94 in 2018. This category refers to the availability and quality of services, including washrooms, internet access, food and beverage outlets and retail options.