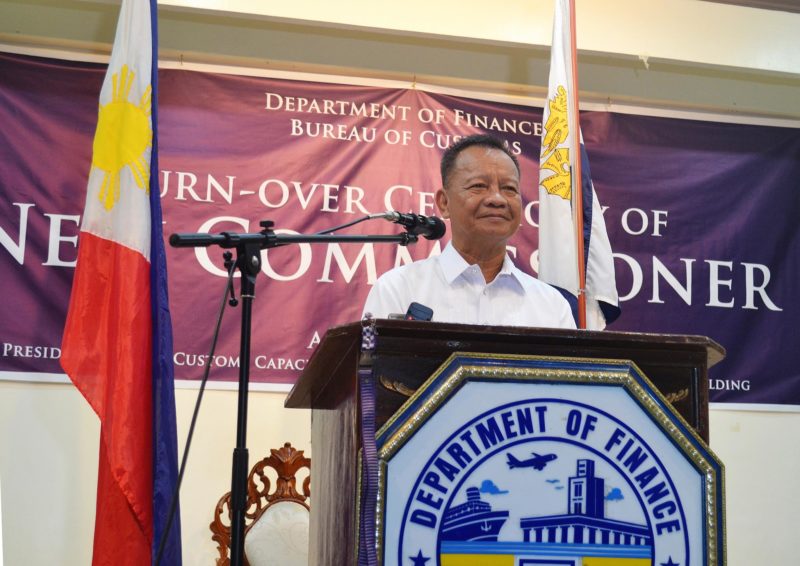 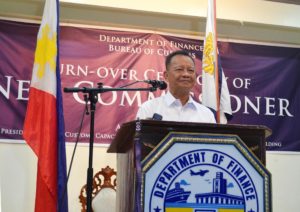 “My top priority, and it should be clear to everyone, is to do away with the culture of pasalubong (gifts) and tara (grease money). Strictly no gift and no take policy,” Lapeña said in a speech during the turnover ceremony at the Bureau of Customs (BOC) on August 30. Lapeña took over from Nicanor Faeldon, under whose watch P6.4-billion worth of shabu slipped past Customs earlier this year.

In a press briefing after the ceremony, Lapeña said he will first address corruption and “along the way that will consequently also improve collection.”

Another key concern is the establishment and enhancement of a bureau-wide computerization of systems and processes “to reduce red tape and provide a level-playing field to all stakeholders.”

“That would ensure trade facilitation and contribute to raise revenue earning,” he added.

The new customs chief promised “major changes” at the bureau. “I am not here to pass judgement but I am here to institute changes—changes that will help regain public trust and confidence in the bureau.”

He appealed to stakeholders, especially importers, to cooperate with BOC “by adhering only to legitimate procedures”, and not contribute to “breeding corruption” in BOC.

“Do not give us reasons to hold your shipment and I assure you that under my turn as customs commissioner, we will only collect legally proper and correct dues. No more tara. Do not include tara in your computation,” Lapeña said.

Lapeña also intends to establish an incentive and reward system for BOC employees so they will “remain steadfast in performing duties and responsibilities with commitment, with competence, with integrity” and deter them from engaging in corrupt practices.

The new BOC leadership plans to create a 24/7 feedback mechanism for reporting and facilitating action on concerns and complaints regarding unlawful activities of customs officials and employees. Informants who will provide correct information will get a reward.

Aside from support from stakeholders, the new BOC chief sought the cooperation of BOC officials and employees. “Help me do my job. I cannot do it alone,” Lapeña asked.

He said he will “work within the organization and utilize officers and personnel who are already knowledgeable and experienced in customs processes.”

“Just do your work, prove your worth, and I will back you up,” he said.

“But once received reports of your involvement on corrupt practices and such reports are validated I will not think twice…I will not let one or two or three destroy the name of the bureau and pull it down the drain,” he added.

For some positions, Lapeña said he will “infuse some new blood” to help him introduce “transformative measures into an old system that has been destroyed by corrupt organizational culture.” He did not identify these positions.

Similar to what he did at the Philippine Drug Enforcement Agency, which he headed prior to BOC, Lapeña said he will implement a “one-strike policy” to boost cleansing at the customs bureau.

Employees and officials proven to have committed violations will be relived as part of administrative action while investigation is ongoing.

The new policy will be supported by intensified counterintelligence efforts, according to Lapeña.

He explained he will create a new counterintelligence unit and utilize other government intelligence offices such as the Intelligence Service of the Armed Forces of the Philippines.

Lapeña also raised a stern warning to unscrupulous individuals who, from information received by the customs chief, are using his name to collect money or ask favors to circumvent customs process.

Lapeña said stakeholders and the public, by virtue of citizen arrest, can arrest individuals doing unlawful activities. He said he will even be giving a reward to those who will arrest such individuals. – Roumina Pablo