About half a million containers waiting off LA, Long Beach ports 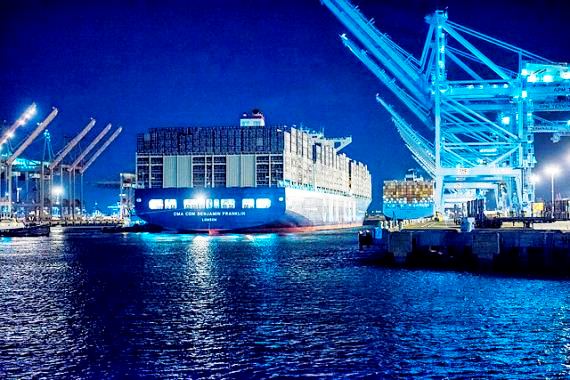 An estimated 500,000 containers are waiting to be unloaded off the southern coast of California, where more than 70 container ships are anchored and waiting outside the ports of Long Beach and Los Angeles.

Gene Seroka, executive director of Los Angeles port, the busiest cargo port in North America, in a TV interview with CNN International on October 6 attributed the record port backlog to strong consumer demand in the US, record-high factory output in Asia, and a 30% increase in vessel capacity in the trans-Pacific trade, even as productivity has been increased and operating hours at the Los Angeles port have been extended.

He said some 76 container ships were currently at anchor outside the ports of Long Beach and Los Angeles, and “they are averaging 10 days waiting to get berthing rights here at the port complex.”

There are also two billion square feet of warehouses from the shores of the Pacific to the deserts of southern California overflowing with goods, Seroka said.

Other factors he cited for the supply chain crunch include those on the landside, including 30% of truck appointments going unused every day.

On the recent oil spill incident off the beaches of California, Seroka said the case of the damaged underground pipeline is still under investigation.

A preliminary report indicates the partial tear could have been caused by an anchor that hooked the pipeline, spilling tens of thousands of gallons of crude oil into the ocean, although there is yet no confirmation of a vessel above the site of the spill.

Huge cargo ships regularly cross above the pipeline as they head into the gigantic Los Angeles-Long Beach port complex. They are given coordinates where they are to anchor until unloading.

The spill, which stretches from Huntington Beach to Laguna Beach, has killed birds and fish, eliciting ecological concerns from local officials and residents.

Meanwhile, asked about reported warnings from shipping workers of an imminent global transport system collapse, Seroka said he does not see evidence of that happening but said “we have to take care of the workers, put health and safety first, but keep the economy moving at the same time.”

He added that he does not see the supply chain crunch easing anytime soon, as American imports are expected to remain strong through an early Lunar New Year in February of next year.

Further, in the second quarter of 2022, north American retailers are expected to focus on replenishing their inventories, which have reached historic lows, and then “a quick pivot into the peak season next summertime” is anticipated.

“So this import buying surge will continue for a while,” he concluded.