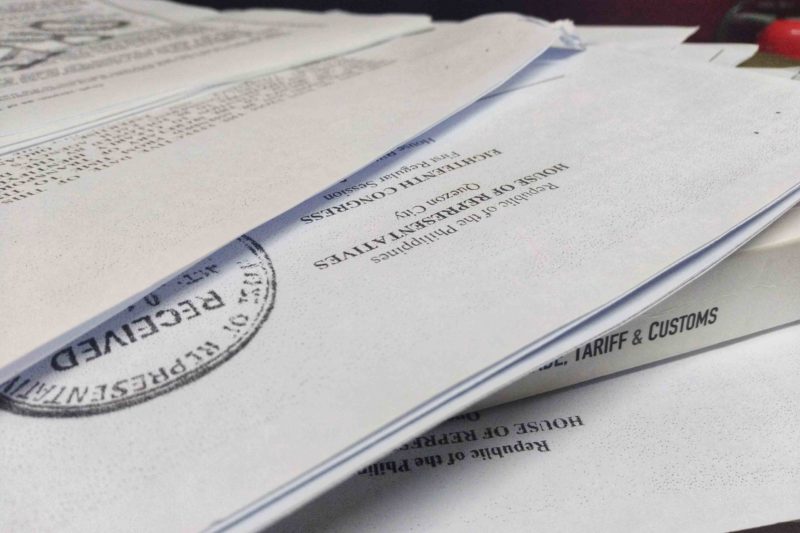 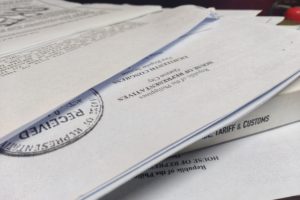 Seven bills have been filed in the House of Representatives (HOR), six of which seek to amend certain sections of the Customs Modernization and Tariff Act (CMTA) to support the improvement and modernization of the Bureau of Customs’ (BOC) processes, while one presses for exempting the agency from the government’s salary standardization law.

HB 783 seeks to amend Section 1226 (Supervision and regulation of third parties) of Republic Act (RA) No. 10863, or the CMTA, and provide a classification system for third parties according to their capitalization and volume of transactions. The classification shall be used to assess the third parties’ capability to import, export, move, store, or clear goods.

Third parties are defined as any person who deals directly with BOC for and on behalf of another person, relating to the import, export, movement or storage of goods.

Biazon, a former Customs commissioner, said investigations conducted by the Lower House Committee on Ways and Means and Committee on Public Order and Safety found that to hide their true identities and evade prosecution, unscrupulous entities smuggling goods and illegal contrabands into the country use “consignees-for-hire” as dummy companies.

He noted that consignees-for-hire—which more often than not are small companies that may not even have the capability to engage in the import, export, movement, storage, or clearance of goods if their capitalization is used as basis—may be considered as third parties under the CMTA.

Meanwhile, HB 784 proposes to amend Section 1141 (Mode of disposition) of the CMTA to allow for the acquisition of services of a private auction house that will undertake all public auctions of BOC.

Biazon noted “there are certain functions that the private sector does more efficiently and effectively.”

“Private auction houses are in a better position to conduct public auctions because of their expertise in these activities,” Biazon said.

He added that the proposed amendment “is also intended to curb corruption in the Bureau in the conduct of its public auctions as it will hopefully minimize, if not totally eradicate collusion between BOC employees and favoured bidders that result to the disadvantage of the government.”

HB 800 aims to amend the CMTA and insert a new section, to be known as Section 206, which will allow BOC to use at least 1% of its annual income derived from its collection of customs duties and taxes in the pursuit of various components of its modernization program.

Biazon said BOC should be allowed to use part of its income to give it “more leeway to pursue its modernization” and move faster in modernizing its equipment and information and technology systems, pursuant to the aims of CMTA.

Under HB 800, the income will be used to acquire, upgrade, and modernize equipment and IT systems, as well as construct, repair, and rehabilitate structures and facilities.

No amount from the income, however, should be used to fund personal services expenditures.

Atienza, in his explanatory note, said the proposed bill would “ensure that all containerized cargo bound for the Philippines would undergo mandatory advance Customs inspection at the country of support or export by an accredited third party cargo surveying company—at no cost to the government as it is the shipper that would shoulder the expense.”

“If properly implemented, this would prevent illegal goods such as drugs and hazardous waste [from] even reaching the shores [of the Philippines],” Atienza stated.

He noted that he had worked in the previous Congress to have the mandatory inspection and clearance of all cargoes included in the CMTA, but subsequent amendments to Lower House and Senate bills resulted in a voluntary program on advance customs clearance under Section 440.

As for HB 5278, it proposes to amend Section 1204 of the CMTA and require declaration of the value of imported goods in shipping and airline documents, and prohibit fraudulent alteration of the cargo manifest, bill of lading (B/L), and airway bill (AWB).

Marcoleta, in his explanatory note, said “many smuggled and prohibited items get through customs scrutiny using spurious commercial and shipping documents.”

Marcoleta said his proposed bill “is expected to significantly deter the use of commercial and shipping documents in smuggling and illegal importation activities.”

HB 5548 aims to amend Sections 102 (Definition of Terms), 119 (Restricted Importation and Exportation), 201 (Powers and Functions of the Commissioner), 307 (Temporary Storage of Goods), 402 (Goods Declaration for Consumption), 405 (Liability of Importer for Duties and Taxes), 407 (Goods Declaration and Period of Filing), 431 (Release of Goods After Payment of Duties and Taxes), and 802 (Types of Customs Bonded Warehouses [CBW]).

Also for amendment by the bill are Sections 806 (Customs Control Over CBWs and Customs Facilities and Warehouses), 1135 (Supervision and Control Over Criminal and Civil Proceedings), 1100 (Classification Ruling), 1129 (Abandonment: Kinds and Effects of), 1147 (Disposition of Restricted Goods), and 1226 (Supervision and Regulation of Third Parties).

Garin said it has only been three years since the signing into law of the CMTA, but it “still needs to be improved particularly on the other third parties involved in the entire customs process.”

Garin said her proposed measure seeks to simplify and clearly define some processes in the customs clearance of goods. To prevent proliferation of off-dock CFWs, which might imperil BOC’s capability to properly supervise and control operations, Garin said there is a need to define the aggregate capacity utilization of such warehouses. Her proposed measure also wants a separate process for establishing CFWs and stricter provisions for granting authority to operate such facilities in order to stop the proliferation of fly-by-night operators and curb smuggling.

Lastly, HB 781 seeks to exempt BOC and sister agency Bureau of Internal Revenue from the coverage of Republic Act No. 6758, or the Salary Standardization Law.

Biazon said that “in order to drastically reduce, if not totally eliminate graft and corruption in these agencies, a system for better recruitment and retention of personnel and the standardization of services should thus be employed in both agencies.”