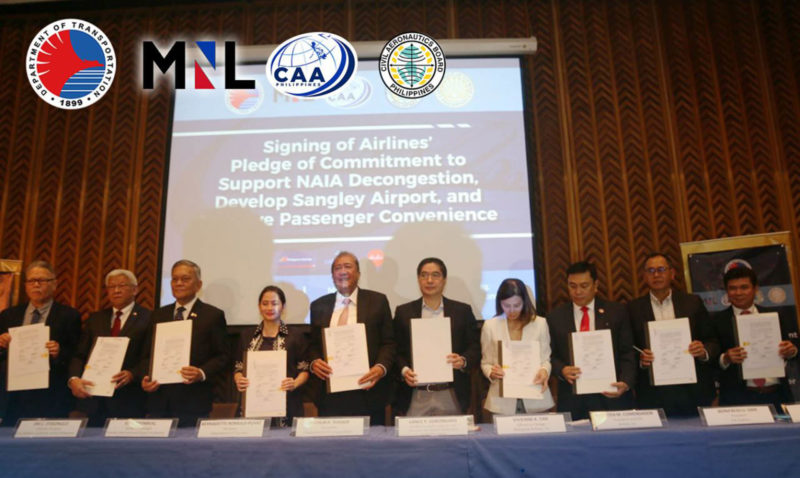 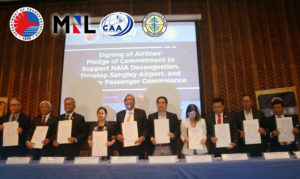 Five Philippine airline operators have committed to review and rationalize flight operations to improve on-time performance at the Ninoy Aquino International Airport (NAIA), as well as to consider transferring commercial flights to Sangley Airport in Cavite, in support of the government’s decongestion efforts at the country’s main gateway.

The commitment comes after President Rodrigo Duterte gave the directive to decongest the country’s main gateway and enhance the comfort and convenience of air passengers.

“This initiative is a testament to the many ways the government and private sector can work together to solve problems. However, I am expecting that this commitment will not just remain a piece of paper, but will be implemented effectively and felt immediately by our passengers,” Transportation Secretary Arthur Tugade said in a speech during the signing ceremony.

The commitment aims to address the growing demands at the country’s main gateway, where annual passenger traffic in 2018 reached 45 million from 36.5 million prior to 2016. The number of flights likewise grew 5.75% ]in 2018?[, resulting in an “escalated utilization of airport slots per hour by 22.2%, or from 36 to 44”, the Department of Transportation (DOTr) said in a statement.

Under the pledge of commitment, signatories committed to review their flight operations at NAIA to rationalize flight numbers, aircraft movement and rotation, as well as the usage of slots and flying rights, to improve on-time performance.

Signatories also committed to support the development of mechanisms of discipline in the event of flight aberrations that are within their control, and to cooperate with government and other regulatory agencies authorized to determine actionable or punishable occurrences.

Additionally, signatories pledged to support the development and promotion of other gateways, especially Sangley Airport in Cavite, for possible viable operations to help decongest NAIA. Tugade has recently ordered a 24/7 schedule for the construction of Sangley Airport to meet Duterte’s timeline of operations by November 2019.

Gokongwei, during a press briefing after the signing ceremony, committed Cebu Pacific’s transfer of flights to Sangley Airport once the facility is operational.

“When Sangley is built, we will have flights there. I think the first step of this is we will be having our cargo turboprop flights there,” Gokongwei said.

However, PAL and AirAsia Philippines have yet to commit to transferring their flights to the Cavite airport, which is targeted to initially handle general aviation and turboprop flights.

“At this point in time, I’m not sure if we still have some turboprops. What we could do is do some studies. I hope that we can talk about it and discuss it,” Tan said.

Comendador said AirAsia is currently operating only Airbus 320 planes, which Sangley Airport might not be able to accommodate.

“For Philippines AirAsia, we operate only Airbus 320s, so at the moment, we are not able to utilize Sangley,” Comendador said, adding that “until Sangley is able to accommodate the jets, then we will consider moving our base to Sangley.”

Asked how much the use of Sangley Airport can help decongest NAIA, Tugade said DOTr has yet to get details from airlines on what flights are going to be transferred from NAIA to the Cavite gateway.

But he noted that general aviation occupies four hours of slots at NAIA, and once all of these flights are transferred to Sangley, the vacated hours can then be used for more commercial flights.

Tugade, however, reiterated that a “basket of solutions” is needed to fully decongest NAIA, and that developing Sangley Airport is only a part of the solutions.

He added that other measures needed to be done include to develop NAIA’s facilities, develop Clark International Airport, provide night-rating to other commercial airports, and improve direct flights in other international airports.

Tugade said 19 of the 44 commercial airports in the country are already night-rated, but the target is to enable 36 airports to handle flights during early morning and sundown, allowing flights to be spread out in more hours during the day. The remaining eight airports, however, are difficult to night-rate due to their surrounding mountains and bodies of water, Tugade noted.

Another commitment under the pledge is to raise the level of comfort and convenience of passengers at NAIA. To do this, signatories shall disseminate accurate and timely information to the public through all available avenues and platforms, including social media and public announcement systems inside terminals and even while inside the aircraft, in instances of flight delays and cancellations.

Airlines shall also provide and distribute meals, snacks, and refreshments to passengers, consistent with the Air Passenger Bill of Rights.

Likewise, signatories should endeavor to support the operation of DOTr Malasakit Help Desks at various airports by distributing their own “Malasakit Kits” to passengers whenever applicable. These kits will contain essential travel items such as drinks, light snacks, wet wipes, and hand sanitizers, among others.