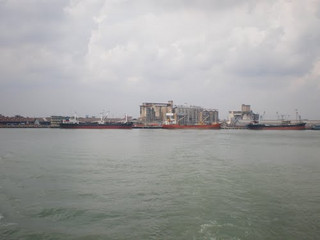 Two possible locations for a third terminal at Port Klang have been identified under an ongoing feasibility study for the planned infrastructure project at Malaysia’s busiest seaport.

The new terminal will be built to expand the port’s handling capacity and increase productivity, according to Malaysia’s Deputy Minister of Transport Datuk Abdul Aziz Kaprawi.

Speaking to local reporters after the launch of the newly expanded wharf, Wharf 8A, of Northport, one of the two established terminals at Port Klang, the official said he could not yet reveal the proposed locations because discussions were still ongoing. “We have not finalized anything at the moment.”

A Hong Kong-based consultant has been hired to conduct a feasibility study on the third terminal, a project under the Port Klang Development Master Plan. The study, presently under government review, is expected to be completed next year.

Once finished, the third terminal is expected to provide sufficient capacity beyond 2030 with its handling capacity of some 30 million TEUs (20-foot-equivalent units) of containers a year.

Estimates indicate the port needs an additional 2,500 meters of quay face, or six 400-meter berths, with about 85 hectares of associated container yards by 2030.

Northport’s Wharf 8A started full operations in December 2013 and could reportedly berth vessels with a draft of up to 17 meters. The MYR350-million (US$106.6 million) infrastructure, part of Container Terminal 4, will enhance efficiency to ensure shorter port stays.

The Department of Agriculture is set to establish in six ports this year the country’s first border inspection (FBI) facilities or agricultural commodity...
Read more